hope you are well and happy!!! 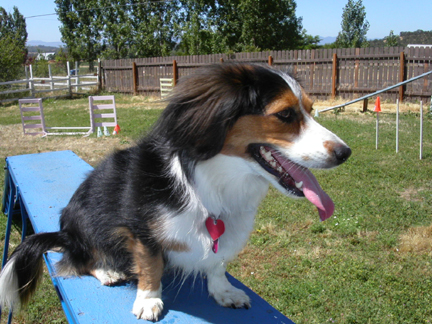 After just one weekend in a cramped kennel, Daisy, our high-energy corgi mix, was nearly climbing the walls. What to do for a 3-week vacation? All Good Dogs Resort to the rescue!

Here were securely fenced, tree-covered grounds where Daisy could romp all day and not be stuck in some pen. We appreciated the requirement that she had to have an "interview" to show that she could mix comfortably with the other dogs. Since All Good Dogs requires that its guests are, yes, "all good dogs," we could relax on our vacation, knowing that aggressive dogs are simply not admitted.

Now Daisy has become a regular guest -- even for shorter stays. Every time we pull in the driveway, she can't wait to jump out of the car. Her permanent friends at the resort include three miniature goats, which she likes to herd (once to the point of driving them up onto a picnic table and circling them).

At last there is the perfect alternative to a kennel in southern Oregon, and we love it!